Some thoughts about Cultural Property

It seems like the battle over "cultural property" has become a circus act, much like life in general these days.  As one who has always had a serious interest in the past, and all that goes with that, it seems adversarial to me when someone says that I don't have a right to enjoy the past in the same way that someone with academic credentials does.  I earned a Masters Degree in a field related to the past, have written more than a dozen books and hundreds of articles about the past, have received numerous awards from prestigious organizations for the work that I have done in that field and even have a vibrant following on Academia.edu.  To me, the fact that I have chosen not to follow the path of professional academia, within the confines of an institution, does not make me an "outsider" when it comes to research, education and appreciation of cultures here and abroad.  Some elements of the academic community see that in a different light and to their credit have amassed a propaganda machine that has rarely been equaled in the history that I love to study and learn from.  They have big money, big government, big egos and pretty much get what they want.

What they don't get, is the benefit of millions of equally intelligent people in the world who are very willing to share their interests and knowledge.  That is not just a sad day for "them", it is a sad day for all of society.  Soon to become an octagenarian, I have seen the world change in many ways.  Some of them have been amazing, some heartwarming, and some baffling.  I have been able to asorb and adapt to virtually all of them, but my mind is unable to grasp the logic that academia pursues these days in it's perceived battle for survival.  Nobody is willing to erase the role of academia, not even the most ardent cultural property internationalist.  But academia is no longer the friend of knowledge for knowledge sake.

There is a strong movement these days to repatriate all cultural property to the lands from which it came.  Since the UNESCO definition of cultural property includes virtually everything made by the hand of a civilization, this is a problematic ideology.  When someone from 19th century China sells a handmade object to buyers around the globe, does that mean that in our age all of those items should go back to China?  What about objects of the 18th century?  Is 250 years a realistic, though entirely arbitrary bar?  How long has legitimate commercial trade been sending objects helter-skelter around the globe?  Does every buyer of an object from beyond their own culture need to create a record of provenance for that item?  Who really owns the things in our homes that we look at and enjoy every day?  The scope of the problem is so vast that nobody has an answer and academia is trying to fit a square peg into a round hole.

The dialogue these days is unrealistic and will ultimately run its course as all bad ideas generally do.  Sadly, that may be too late to undo the damage that has already been wrought between society at large and the academic community.  I wish that weren't the case.
Posted by Wayne G. Sayles at 5:46 PM No comments:

Media in our day and age has a profound effect on the mood of our country and the path taken by citizens and legislators as well.  In recent years, some have questioned whether the Media has not become too active as an agent of specific points of view rather than a medium for dissemination of facts and events.  In the process of doing research for a local historical project, I came across a short but delightful comment in the Shelbina Democrat, the news medium for Shelby County Missouri in the 19th century.  In a gratious sense of fairness, the newspaper lauded a competitor, the Troy Free Press, for its openmindedness and adherence to a standard of fairness.  To the Shelbina staff, this was "True Journalism".  I would agree. 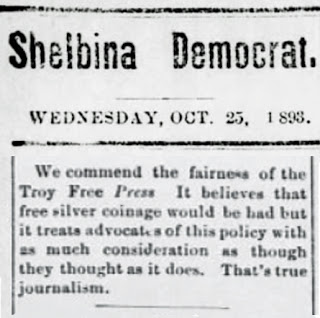 One might wish that the media of our own time was so magnanimous and the industry so dedicated to their purpose.